Judy and Punch and The Nightingale

Note: Plot point discussions follow for Judy and Punch and The Nightingale

It’s incredibly disquieting that two revenge flicks, both supported by Australian State funding agencies, both starring Damon Herriman in the role of an abuser and both featuring the graphic deaths of infants screened at Sydney Film Festival on the same day.

That analogous doesn’t stop there. The lead characters, played by Mia Wasikowska and Aisling Franciosi respectively, both bereft of family enlist the help of those shunned and dwelling in the nearby forest. In Judy and Punch it’s Virginia Gay ‘hiding’ among the trees in nonsensically near plain sight from those who apparently don’t take too kindly to her lot, and in the case of the latter an Indigenous tracker (Baykali Ganambarr).

Both bear uneasy depictions of violence, yet one resonates powerfully and with evident quality. The other, ill-considered in near every respect.

Judy and Punch, the new feature from Australian Director Mirrah Foulkes set in ye olde England’s Seaside (nowhere near the sea) depicts the titular puppeteers (Wasikowska and Herriman) who are somewhat successful in their stage show. Attempting to subvert the awful violence that is the basis for the well known act where a husband regularly assaults his wife, in the Sydney Film Festival program Foulkes describes the events that ensue as an “epic female driven vengeance story” and “bat-shit-crazy.” 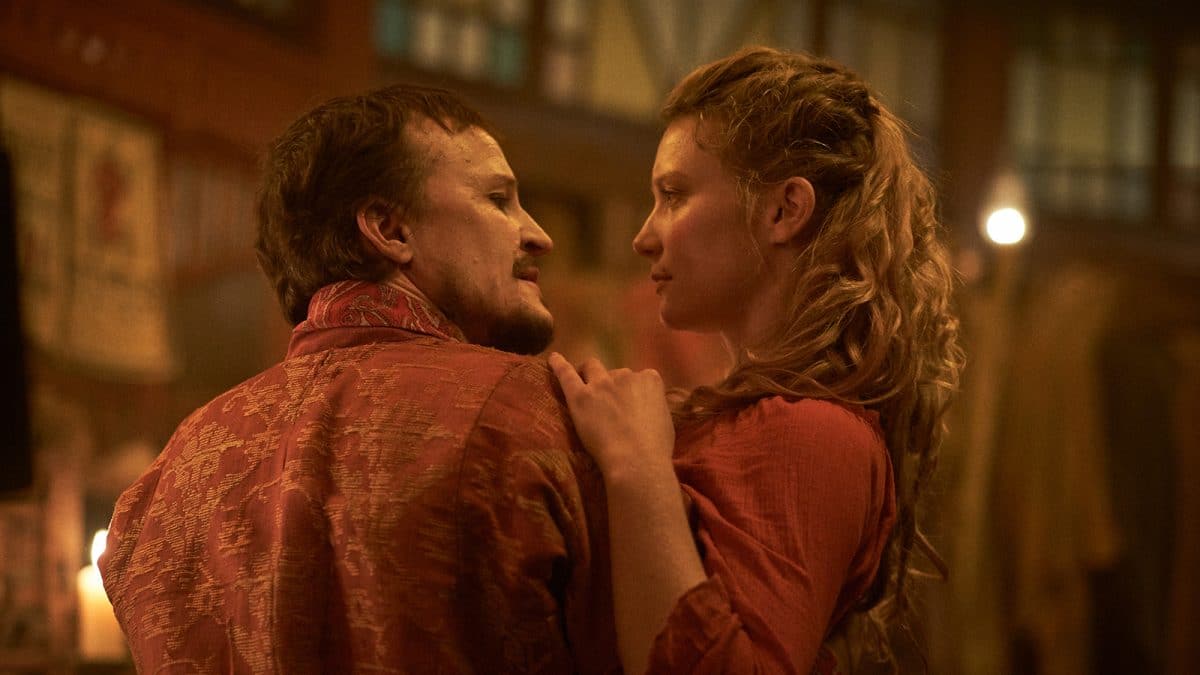 Let’s start with what’s good about this film; Mia Wasikowska. Ever-reliable, in spite of what she has to work with she rises above the material with a dedication to the role which this movie does not deserve. There is also a good gag involving a set of nooses, Benedict Hardie as the residing Police Officer is very funny on occasion and there’s one great line involving ruffians whose speciality it is to obtain confessions.

Now; everything else. Damon Herriman, in a role that was sorely intended to chew the scenery, does not. He neither plays near emphatically enough to Punch’s least forgiving traits nor the inherent absurdity in much of the proceedings, pursuing each of these strands interchangeably to confusing effect. His approach to the role underlines one of the core problems with this film in that three of the leads are all starring in different movies, with Hardie channelling Fry and Laurie while Wasikowska takes a comparatively more serious approach; understandable given the particular grievances Judy suffers.

As to the forest itself, the filmmakers take inspiration from the likes of Hook’s Lost Boys and those who could otherwise use otherworldly properties to stay hidden. Here the band of not so merry mortal outcasts could be set upon at any minute in spite of the facade that lifts to ferry Judy into their world. Together ruminating in the forest and presumably having had some time to upload some Matrix-level ninja-training programs, a later at least double somersault flip one character manages across an expanse would have been digestible had anyone else, anywhere in this universe even hinted something like this had been possible any time in the long minutes elapsed since we long since grew tired of this film.

Going full Crouching Tiger Hidden Dragon while very heavily equipped (that reminiscent of Kill Bill is too blatant and numerous), Shakespeare fans might recall Kenneth Branagh’s painful flourish as his Hamlet hurls his sword (and then a chandelier) across the throne room into his uncle. This sequence is too immediately preceded by an extremely literal reference to a large portion of a famous speech in Gladiator. Yes you will see Paramount credited if you stay past the performers’ names yet this wholly unnecessary hark back just takes us out of what at least to that point in spite of all this film’s misgivings (and fairly one that deliberately plays fast and loose with that anachronistic) still did well to situate us in an England of another age. For an idea of how it resonates, cast your mind back to the Ed Sheeran cameo in Game of Thrones.

Worse still, a later subplot involving Punch’s abuse of another woman (and her children) bears no relevance to the plot and does not affect the outcome of events. When something occurs, however violent, that has repercussions and consequences within the narrative a fair argument may be made that it’s inclusion is justified (more on this later). It could be said that this sequence establishes that Punch is an indiscriminate abuser, but we already know this from his treatment of women and men who are not Judy.

As such the strand bears no relevance to the outcome or that which transpires and doesn’t establish anything beyond what we already know, being that Punch is a terrible human being, something we learnt from our earliest encounters. The effect of including that extraneous, however harrowing, is to emphasise a focus on the violence and degradation rather than the consequence, a practice in Hollywood that has been highly criticised as of late for lending a gratuitous air to that which does not merit gratuity. Yes the abuse this character suffers who is not Judy is sadly reflective of real life environments and experiences both contemporaneous to the film’s setting and today, but to include multiple instances of the phenomenon without underlining the consequence of each, whether it be tragic and/or better reflective of some semblance of justice, bears the criticism that the film isn’t so interested in the morality of violence but in effect, and problematically as discussed, the depiction of violence itself.

To the interpretation that the action taken against Punch later in the film is concerned cumulatively with all his acts of violence, this simply doesn’t hold up. That which occurs specifically addresses the gruesome first act crime(s) which propelled this story while callous disregard is shown for some other victims who might very well have died in the execution of a showy reveal.

Judy & Punch, unlike The Nightingale, has discernible moments where a fair reading could be that the film glamorises cyclical violence. The presence of cyclical violence is not a problem in and of itself and granted is a mainstay of many significantly more violent features. Tarantino’s name usually comes up at this point, yet the Pulp Fiction Director’s ilk either portray the awful effects of violence, psychological or otherwise, for those who pursue same in response or lend proceedings such an exaggerated air to underline that which should be seen as absurd and ill-fitting to real life.

In it’s rendering interchangeably of multiple, disparate tones, Judy and Punch does not achieve such even if some of it’s attributes are reaching for this; one flying leap through the air and a few flourishes an absurdist portrait this does not make. The confluence, if lending it an air of unpredictability, never goes so far as to take a discernible stand on violence akin to the films it is emulating, emerging as a feature confused and troubling.

Compare this to The Babadook Director Jennifer Kent’s The Nightingale. Set in Tasmania in 1825, Clare (Franciosi) pursues across the wilderness the men and Officers who have wronged her, played by Sam Clafin, Herriman and Harry Greenwood.

Much has been made in the press about (exaggerated) walkouts and audience reactions at Sydney screenings in light of it’s more graphic content, though this author would urge that this film is one that dearly merits viewing.

The Nightingale manages a great deal of nuance as regards the fraught relations between the British officers, Irish convicts (and former convicts) and Indigenous Australians. Franciosi, superb in The Fall, here excels in a lead role as does the very underrated Clafin. Ganambarr is too excellent as are the remaining cast, resplendent in Kent’s beautiful cinematography and capturing of her chosen vistas.

A focus on language also recommends this film, with an emphasis on Indigenous dialects and too Gaelic; here spoken by a number of characters.

What sets The Nightingale apart from Judy and Punch and many others is that the violence, much more graphic than in Foulkes’ effort, is the subject of cause and effect. A later, harrowing assault on a secondary female character and her family, one that might seem immediately irrelevant to the core narrative, effects proceedings in an abundance of practical ways. The treatment of Indigenous Australians broadly seen throughout the film too has emotional, perceptible ramifications for characters’ actions.

An argument could reasonably be made that the second sexual assault which occurs in the first act and a later, violent action taken against a young character do not actually add to or inform the plot. The latter act unlike near all else is largely extraneous to proceedings, bringing into question why it was included in the first place, yet the earlier sequence does highlight widespread forms of violence as a specifically male and cyclical phenomenon; unlike Judy and Punch imparting a defined, clearly contemplated moralistic approach to the tragedy of violence as a cyclical function.

To this end, the sequences that are graphically violent highlight their sadness and consequence, rather than broadly lingering on gore for the sake of it as is the case in many other films. As one character experiences an arc befitting the filmmakers’ clear view on vengeance and it’s violent effects, another character undergoes a powerful arc of self-actualisation that viewers will not soon forget.

The Nightingale is not without its detractions, with characters hitherto making foolish decisions such as leaving another character armed and in near plain view of others who given the sight would take swift action. It could just as well too have been a tad shorter yet still earns its runtime.

Finally, an observation rather than a criticism. Australian Government bodies have statedly championed gender diversity in filmmaking as has damn well always been their responsibility; in this case funding two in respects not dissimilar female-driven vengeance movies. This author is not and will never criticise filmmakers for their choosing to tell a specific story, yet consider how common it is for men to be afforded roles where their characters take vengeance for acts done to others or loved ones rather than themselves, and how rare it is that such a role is afforded to women.

Routinely tasked with roles where characters take vengeance for acts directed at themselves and sometimes as well unto others, as is the case with these flicks among many more, how often is it that a role arises where a woman takes vengeance for acts, as is regularly the case with men, done to others alone? Paul Verhoeven’s masterpiece Black Book springs to mind, but there aren’t too many examples and the matter of how frequently sexual assault against women in film is used as a catalyst for a male-driven vengeance story is well documented.

It’s notable in The Nightingale that a male character was permitted the opportunity, unlike the main female character, to take action for crimes done unto others rather than themselves. To the extent that this is a comment on cyclical violence as a male phenomenon again this observation is not a criticism nor aspersion on a good film that people should see. However if Australian screen bodies really want to champion the role of women in the screen industry they might consider too granting the type of role to a woman that is all too often only granted to men. Just a thought.